Autun was recommended to us by our friends here in Dijon. A quiet town in the hills, it’s got a totally different feel than other towns in Burgundy we’ve visited with the winding streets connecting the high and low parts of the town. It’s claim to fame is the Roman theater and Roman ramparts found around the city. Back in the day the first Roman Emperor, Augustus, decided to call this city in Gaul, Augustodunum. From then on it was a powerful city, where the first Duke of Burgundy came from and where the Bonapart brothers studied many years later. Today, you can see a bit of the history of France in Autun, from Roman, Romanesque, Medieval Fairy Tale (found: Belle’s house from Beauty and the Beast-see pic below), and 19th century art and architecture.

Today the remains of the great Roman past can be seen at the Roman theater. Said to have held nearly 20,000 people it sits on a green hill patiently offering a seat to the generations-who now can watch a soccer game in the field below. Training next to Roman ruins, pas mal.

After the Roman ruins, Autun is known for its cathedral. A heavy structure with typically Burgundian colored rooftops, it seemed to have fallen into the only space left in the high part of the city-the next door buildings were seriously encroaching. Inside it is dark and under restoration, one thousand years of use begs for some care. But despite it’s seeming lack of grace and space at first view, the sculptures of the last judgement on the entrance portico seem to have been carved out of air just yesterday. 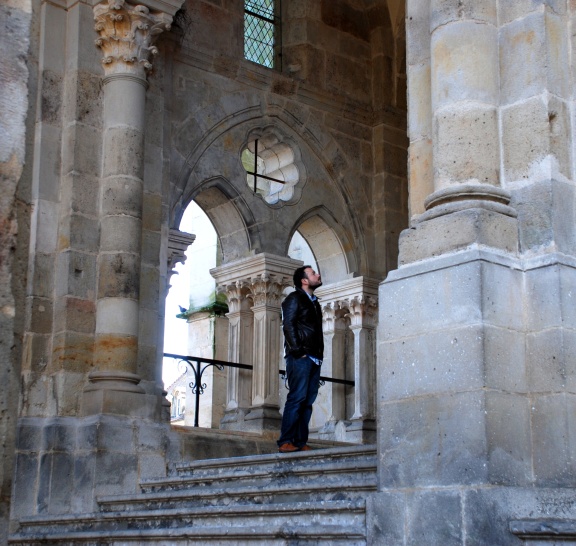 Visiting on a Sunday there wasn’t much more to see, so after a quick stroll around the cathedral we ended our visit with a café créme watching the locals head to the town hall to place their votes in the first round of the French presidential election (way back in 2012!). One last reason to remember Autun for all you design folk: Autun is home to these fab Tolix chairs.
Besos, Dianne

I'm Dianne! From Michigan to France, with lots of stops in between, join me as I share my adventures and tips!

All photos by A Beautiful Journey unless otherwise noted. I hope you enjoy them, but if you decide to use them please give credit and a linkback to A Beautiful Journey. Thanks!
Loading Comments...
Comment
×
%d bloggers like this: